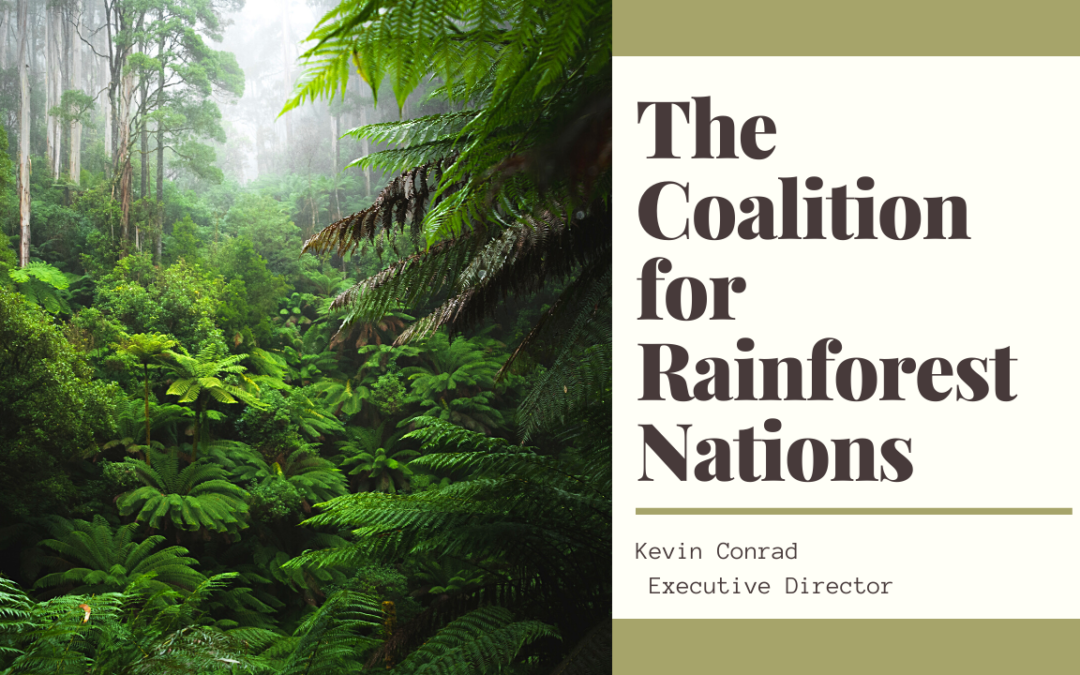 What does the Coalition for Rainforest Nations do?

We want to keep developing countries in that momentum of saving forests- we pay them money to do so. We want to conserve and fund forests to get the emission reductions necessary. 93% of the world’s rainforests participate with the coalition.

How does CfRN help governments and communities manage their rainforests (and fight climate change)?

We tried to find places where governments were already participating in conserving their forests- we have to help these governments be able to provide the services that their communities need for the work that those communities are doing saving their rainforests.

How was CfRN started?

It was started about 18 years ago – it was my thesis in grad school- we had to write a paper on something that interested us. My interest was the whole question of how you help indigenous communities develop, have health, education, and have places to live without cutting down their forests? I was struck by how can we protect these traditional livelihoods without having to destroy the world that they love?

Who are the members?

We try to work directly with the government- the minute you drop an office in any location, you take away the government’s capacity to do it themselves- so we intentionally only send teams to train, follow-up and provide support. But we want governments to own this and set the policies themselves.

What is the REDD+ Mechanism?

CfRN played a major role in the establishment of the “Reducing Emissions from Deforestation and Forest Degradation” (REDD+) mechanism for incentivizing forest conservation.

Then plus came in when India came into the negotiations and said they had pretty much stopped deforestation and our biggest concern now was to rehabilitate weak forests. So we needed to conserve and enhance forests. Causing deforestation hurts the climate two ways: one, deforestation puts carbon in the atmosphere, but two, it reduces the forest area that’s pulling carbon out. So you want to pay for people who are actually pulling carbon out of the atmosphere as well.

How much of an impact has CfRN made?

Developing countries have reduced about 8 billion tons of carbon emission from slowing their deforestation in the last 15 years. We have saved about 1 billion acres of forests from being deforested- because we pay them money to keep them.

How is CfRN funded?

They are what I call two buckets of funds – the funds we, the coalition, use are helping countries actually do this- how do you set up policies, laws, measure forests, count carbon? We help with all these issues. The second bucket comes in when countries have successfully done it- how does the rest of society come in and help you pay for those ecosystem services so that forests can remain standing?

How can listeners find out more and support CfRN?